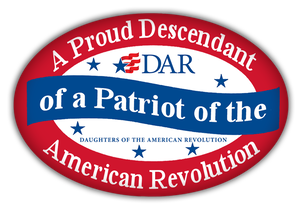 What determines eligible patriot service?
In general, Patriots are those who served or gave specific aid to the Revolutionary cause. Visit our ​our National site for a more detailed list of eligible service or contact our Registrar.
Civilian Service (CS) is holding service in a Civil Office such as County and Town. Officials such as Town Clerk, Selectman, Juror, Town Treasurer, Judge, Sheriff, Constable, Jailer, Surveyor of Highways, Justice of the Peace, etc.
Patriotic Service (PS) includes:
Members of the Continental Congress
​Members of State Conventions
Members of Assemblies
Members of committees made necessary by the war
Signer of Oath of Fidelity and Support
Members of the Boston Tea Party
Signers of Petitions
Defenders of Forts and Stations
Member of the Cherokee Expedition
Members of the Galvez Expedition
Ministers who gave patriotic sermons
Prisoners of war
Prisoners on prison ships
Service in the Spanish Troops under Galvez or the Louisiana Militia after 24 December 1776
Service performed by French nationals in support of America
Those who lived on and defended frontiers against British forces and their allies
Those in Spanish America that supplied cattle for Galvez's forces after 24 December 1776

Those that rendered aid to the wounded that were not immediate family members including doctors, nurses and surgeons